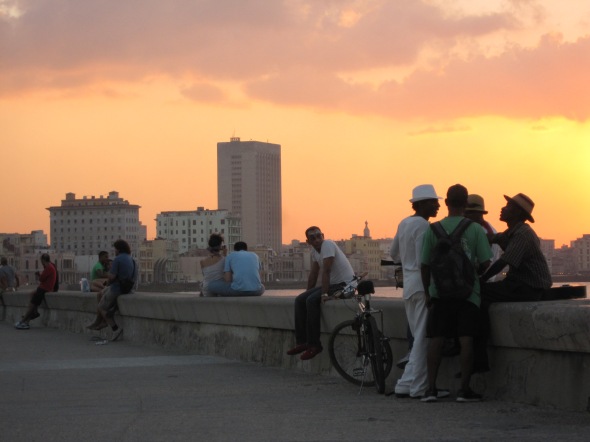 My first Aussie visitor to Cuba was my 19 year old goddaughter Madeleine whose arrival coincided with the start of the International Book Fair in Havana so I had two brilliant reasons to visit the capital and be a tourist for a while. The ‘feria’ was held in one of Havana’s old forts, Fortaleza de San Carlos de la Cabana, a truly spectacular venue for a literary festival. The 18th Century fort is perched on a rocky ridge above the harbour and next to the 17th fort El Morro which was captured by the British in 1762. It offers a birds-eye view of Old Havana and the city beyond. An enormous structure it normally houses restaurants, tourist shops and two museums and features a number of old canons that are fired at 9pm nightly. This year Cuba invited authors from Angola to attend, but authors and publishers from many other countries including USA also took part in the festival which ran for 2 weeks. Ocean Press, which publishes histories and political monographs on Cuba was Australia’s only representative. Books were for sale in both currencies (tourist dollars and Cuban peso’s) utilised in this country. I was saddened to see the prices of the children’s books appeared to be more expensive than the adult books. 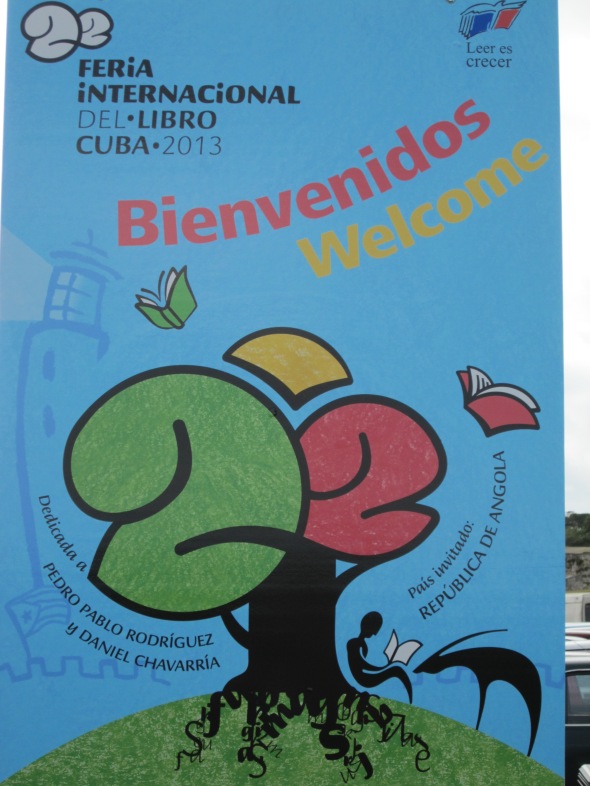 What was heartening was the vast numbers of people who attended and waited for hours and hours in queues to buy books. Cuban queues are an interesting experience as they are fairly fluid in terms of numbers as I discovered when trying to enter one book stall. A light shower of rain sent many people running for cover and just when I thought I was perhaps a half hour away from the front of the line, at least 20 people, resumed their places. I did manage to find a room full of books from various Mexican publishers including a pile of The Guernsey Literary and Potato Peel Society by Mary Ann Shaffer (La sociedad literaria y del pastel de cascara de papa de Guernsey) and The Open Veins of Latin America by Eduardo Galeano. The former was one of Allen and Unwin’s bestsellers and I was so pleased to see it I bought two copies, one for me and one for Osiel’s mum. The latter is the book that Hugo Chavez gave to Barack Obama when he won the Presidency and a must read if you are travelling to south or central America and want to brush up on some history as told by the conquered, not the conquerors.

As I strolled through the town early one morning on my way up the hill that has a television tower on top, I encountered children of all ages in fancy dress. It was Jose Marti’s birthday and in Trinidad this is celebrated with a large procession of school children ranging from 5 years old upwards parading in marching bands around the square as part of an inter-school competition. Some of the very young children were dressed in colonial costumes, the little girls in white flowing dresses with red and blue trim (colours of Cuban flag) and the little boys in suits with top hats, sporting fake moustaches. Others appeared in more fanciful costumes as tigers, fairies, Indians, princesses, cowboys and miniature show girls (in brightly sequined costumes). The older girls all bore strong resemblances to cheer leaders, wearing very short skirts, stockings and white boots, flowing coats lined in tinsel, and carrying marching sticks. The older boys were formed into ‘colonial military bands’ and gleefully made as much noise as possible on their drums, trombones and trumpets. Children carried placards quoting Marti, my favourite being: To read is to advance. Marti was a 19th philosopher, writer and revolutionary and is much revered and quoted in Cuba.

The square was full of parents, mostly mothers fussing over the makeup or hairstyles of their children or proudly watching from the sides. Venders were selling popcorn, balloons and whistles. Afterward the children could have their photos taken astride a highly decorated horse, or a fake reindeer??? or in front of revolutionary images or illustrated verses from Marti’s poems and stories for children. 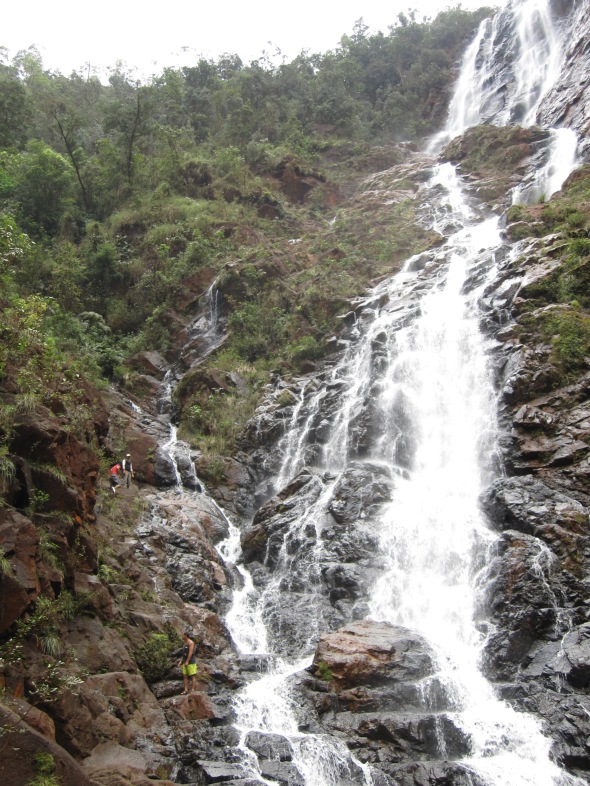 Madeleine’s visit also gave me an opportunity to explore some yet unvisited parts of Cuba, including the famous beach at Guardalavaca and Cuba’s highest waterfall (100m). As she and Osiel would discover road travel is always a challenge in Cuba and requires an eagle eye and lots of patience. My travelling companions in 2011 will well remember the many signs we passed warning that the road was in ‘mal estado’ (a bad state). Through trial and error we learnt this meant to slam on the breaks quick. I am pleased to report that the pot holes have all been filled in and fresh tar laid between here and Holguin, at least. The shared usage of this single lane national highway by horse and cart, cyclists, pedestrians and animals (how stupid are goats?) remains the same however and this is now somewhat complicated by the increasing number of large tourist buses and new Chinese semi-trailers that show no mercy to other motorists. So Fiona’s road rules still apply: never drive at night, front seat passenger operates as look out as well as map reader and we stop every two hours to stretch, rest and snack on homemade cheese, guava paste and fresh fruit purchased along the way. Annoyingly the mango trees are currently laden with unripe fruit.

We were in fact pushed off the road by a police escorted tourist bus one afternoon, travelling at high speed. None of us could decide if the bus was running late and needed to make up time or it had a VIP on board. If there were such a thing as a suggestion board for the government I would be putting bike lanes on the highways near the top of the list. Cats-eyes have not yet arrived in Cuba and the invention of painted white lanes on roads is not widely heard of either. A thing to be praised however is the traffic lights that come with a numeric countdown so you know when they are about to change in place of the amber light. Gives the old American cars time to rev their engines and get them into gear.

I did witness what could have been a very nasty accident, but fortunately wasn’t, one evening when a motorcycle travelling along the road to La Boca, outside Trinidad, ran into the back of a horse and cart. This model of horse and cart didn’t have any lights or reflectors and the motorcyclist only caught a glimpse of it in his somewhat dim headlights when it was too late. I seem to recall a similar accident happened to my grandfather when he was a young man on his Harley Davidson, with my grandmother riding pillion. He always complained that the horse needed break lights. 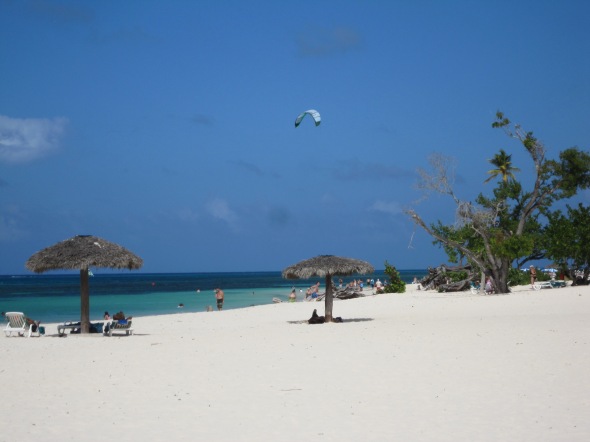 We got to see firsthand evidence of the damage wreaked by Hurricane Sandy in Holguin province. Firstly in a small seaside village outside of Gibara (Columbus originally landed near here in 1492) where some houses had been reduced to rubble and others were still without their roofs. The same could be said for many houses in Gibara and Banes (former headquarters in Cuba of the very evil USA owned United Fruit Company) near Guardalavaca. The wonderful pine forests in Pinari Del Mayari, a national park in the mountains outside of Holguin, were also raised to the ground or chopped in half by the hurricane that blew here for 6 hours. It appeared as though a giant had gone on a rampage through the mountains wielding a large machete. As we descended to the bottom of the 100m waterfall in the park we had to dodge many fallen trees and climb over large trunks. The lookouts and toilets at the top of the ridge had been completely destroyed and the poor ranger in residence had to hide himself under their foundations so as to not to be blown away or crushed.

There are plenty of sad looking palm trees in this region, Hurricane Sandy leaving them with only a few fronds attached. The countryside is, however, much greener and more fertile than in Trinidad which currently resembles crunchy, beige coloured Australian paddocks and the bush after a bad bushfire season. Who’d have thought that a tropical Caribbean island would be blackened and drought stricken in parts?

I finally got to see a performance by the Cuban National Ballet whilst in Havana. Unfortunately not in the beautiful Neo Baroque Grand Theatre which is currently being restored. Nevertheless we had fabulous seats, front and centre, purchased only hours beforehand and witnessed some of Cuba’s best dancers perform, in the company of Alicia Alonso (Founder and former Prima Ballerina) who apparently attends every show, including a Carlos Acosta look alike. Might have been him in fact but the dancers were not listed on the program which featured 5 short classical and contemporary pieces including a breathtaking performance of the dying swan scene from Swan Lake. This was performed by one of Cuba’s leading ballerina’s judging from the enthusiastic applause and bravo’s she received from the Cuban members of the audience. The final was a fairytale ballet performed by students from Alicia’s National Ballet School and was accompanied by a full orchestra.

It’s raining here today, for the first time in months, and I am feeling very nostalgic for my nephews and our puddle jumping expeditions around Manly. A cold front has finally arrived from the north and at 24 degrees Cubans are freezing. Those who have ventured outdoors are wearing big coats and pullovers, with socks and thongs. I too, tragically, had to dig into the bottom of my pack to find my fleece and seriously considered the jeans too. Our poorly ventilated bedroom is a very cosy place to be for a change. We are currently sharing it with the household cat and her 3 kittens whom were born the day after we returned from Havana. A Calico look-a-like (tiger), a ginger and white male and a black and white female. Our fishing expeditions have increased in frequency to satisfy the hungry mother.

#15 :: The unexpected beauty of doves »
« #13 :: Remember when riding on a ferris wheel was one of the most exciting things in the world?

Peaches - white flesh, juicy and so so sweet. First crop@casalosmangos#happygardener#tropicalgarden#cubanfood#bountifulgarden#trinidadcuba#caribbeanisland#cuba#bedandbreakfast
We are all having fish for dinner @casalosmangos#snapper#handlinefishing#cubanfood#caribbeanlife#whyvisitcuba#bedandbreakfast#trinidadcuba#seatotable#catchoftheday
Caught with hand lines #cubanstyle#snapper#caribbeanlife#gonefishing
Rainy day - gardeners day off @casalosmangos #wetseason#somewhereinthecaribbean#tropicalparadise#airbnb#travelcuba#bedandbreakfast#gardeninglife#gardenview#trinidadcuba
Before the clouds hid the total eclipse, blood moon here last night#moonlight#overcuba#carribeannight#nightsky#trinidadcuba
Good morning from @casalosmangos and our #peruvianapplecactus#cactus#tropicalgarden#beautifulblooms#beemagnet#cubangarden#airbnb#whyvisitcuba#travelcuba#cactus#earlybird
Loading Comments...
%d bloggers like this: