# 32: US Relations, Carnival and Pinata’s

It’s still a big topic of discussion. The announcement of December 17 when Obama told the Americans, and the world, he wanted to end an outdated approach, a rigid policy that is rooted in events that took place before most of us were born. One he dared to add has tried to push Cuba towards collapse. There is a very funny comedy skit about the phone conversation between the two leaders by Los Pichy Boys (check it out on U-Tube): Obama rings Raul to say that Michelle wants a holiday in Cuba and that it is time to resolve the problems between Cuba and the US. Raul says no problem my friend it’s time for a change, just send me back those agents you’ve had locked away for 15 years and we’ll swap you the old bloke we’ve got here, USAID worker/naïve spy Alan Gross. 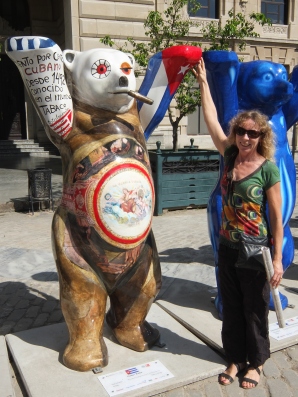 Raul Castro’s announcement about the return home of the agents and the phone conversation with President Obama, that took place on 16th December, was a momentous event aired live on TV before the midday news. We don’t usually watch TV during the morning but we did happen to be when the first news flash came through that President Raul Castro would be speaking to the people at 12.00pm. Not sure if it was wishful thinking or not but I did say to Ossiel that it would have be something about the embargo or bloqueo as it is known here.

Unfortunately the embargo has not been abolished, yet, but there has been a renewal of diplomatic relations and an easing of travel restrictions for US citizens.

So Cubans are certainly feeling much more positive about their future now. The return of all of the 5 heroes, double agents who 16 years ago had infiltrated Miami based organisations suspected of terrorist and anti-Cuban government activity and then found themselves in prison after passing their information over to the FBI, was cause for major celebrations all over Cuba.

There is not surprisingly mixed feelings amongst tourists, about Obama´s announcement as many fear that Cuba will change too much and too quickly and hence lose its unique appeal, its culture and its social and political system. (Hence we have had a lot of enquiries and bookings of late.) I’m more optimistic given that the Cuban revolution has survived for over 50 years despite constant sabotage attempts from right wing elements in the US and the terrorist activities funded and perpetrated by the Miami mob (including the bombing of a Cubana Airlines flight to Barbados which killed 73 people in 1976. Amongst them the entire Cuban National Fencing Team). If you want to know more I can recommend Everything you Need to Know about Cuba by Julia Sweig, published by Oxford University Press, or search for the documentary Will the Real Terrorist Please Stand Up!. 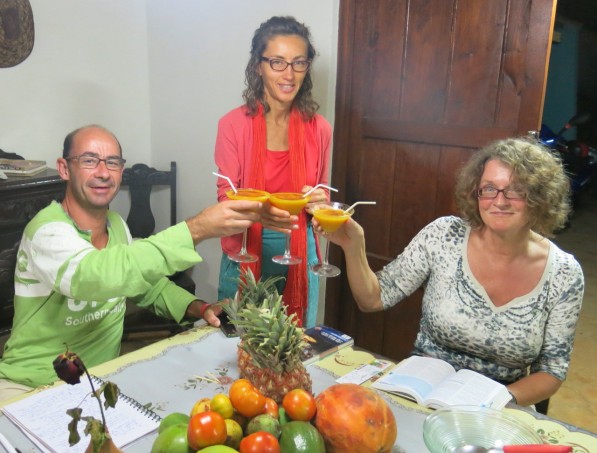 It’s raining and I am as happy as the plants. The last time we had descent rain was in October. The nights and mornings have been cold, thanks to cold winds from the north, and so my jeans have seen the light of day again. I have lent out my fleece and gortex raincoast to our guests who came prepared for a tropical isle climate, which is normally is. The rain confirms that it’s is going to be a good mango season this summer so I have already started recruiting helpers to bottle and freeze as many mangos as we can before we (Osiel, 8 year old Erika and I) head Downunder in June for a wedding and to catch up with much missed family and friends.

We had a belated Christmas Day with the arrival of Brendan from Sydney carrying a suit case full of goodies including vegemite and books, a T shirt for my usually shirtless husband, a FunLoom for Erika and a pink handbag for Beatrice amongst other delights. The 25th of December was celebrated with a Roast Turkey which, as our English and Canadian guests will recall, was a tad overdone. Ossiel is a master seafood chef, but he hasn’t had much practice with poultry. We bought each other a couple of hens and turkeys for Christmas to add to the Casa Los Mangos menagerie. The male turkey became Christmas feast but we had kept with local tradition and had pork for New Year so our female is still providing us with wonderful yellow eggs and helps keep the chicken eggs warm. A rooster turned up one day and has decided he likes the place so we may yet get some baby chooks. 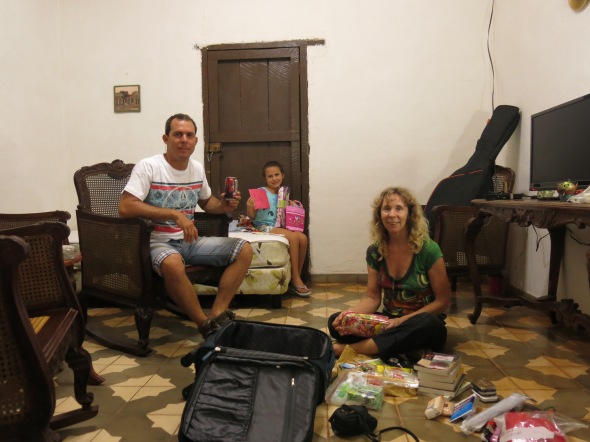 Brendan happened to be here during Cultural Week and got the pleasure of accompanying us and the kids to the carnival and riding on the ancient ferris wheel. He was also treated to cotton candy (fairy floss) made in a metal drum, ice-cream sandwiches and non-alcoholic pina coladas that are so cold you get brain freeze. The kids talked me into taking them on the self peddle cable car. What appeared to be a fairly sedate ride turned into quite an adrenaline rush. Nobody had pointed out it came with a brake. We wizzed around the corners so quick we left our stomachs behind. The kids weren’t keen for a second circuit. 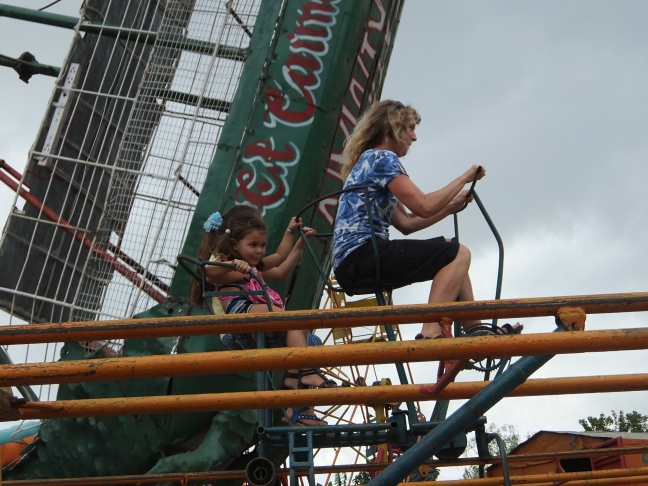 I saw a lovely sight when I was in Old Havana recently, with Brendan, during a quick walking tour. An exhibition of brightly painted life size bears standing in a large circle in the Plaza de San Francisco de Asis, with arms raised as if cheering in unison. Each bear represented a different nation. The Australian bear I recognized immediately, painted by Ken Done. Cuba’s bear was of course smoking a cigar. 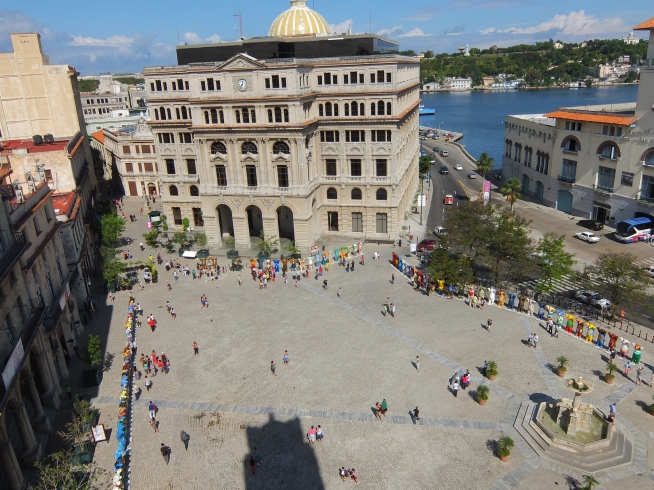 Thanks to encouragement from a recent Canadian guest, Bonnie whom I met 12 years ago here in Trinidad, I have taken a few tours into the Sugar Cane Valley outside Trinidad and to Sancti Spiritus, another 500+ year old city an hour away. Some of the old plantation mansions have been restored or are under restoration. One plantation in particular, San Isidro, includes an excavation site complete with slave quarters, sugar factory and rum distillery which is still very much a work in progress. I look forward to each visit to see what else they have uncovered. The house now has a roof. 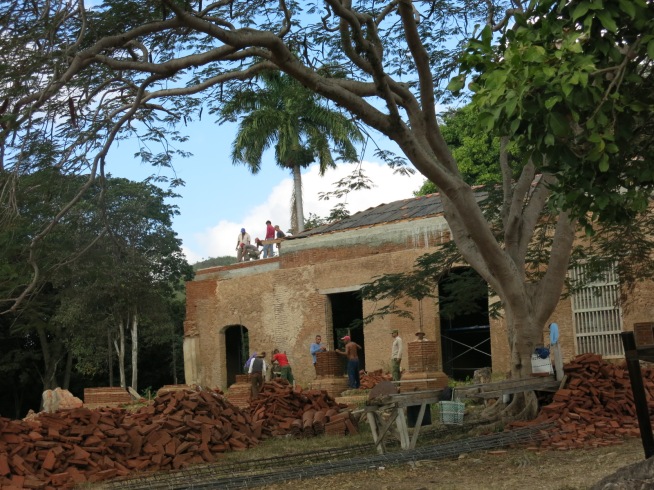 Erika performed this year in the local parade to celebrate Cuban Independence Hero, Writer and Poet, Jose Marti’s birth. As I described it to my Aussie guests the parade is a blend of military marching band crossed with football cheer leaders. All the local primary schools participate having practiced their routine for weeks and the entire town turns out to watch and cheer. Pre-school aged children accompany parents and older siblings in the parade dressed in fancy dress. There were quite a few gypsies, clowns, super heroes, princesses and mini colonial dandies and ladies. After they have performed the kids are lined up to have their photos taken in front of painted screens depicting scenes from Marti’s stories for children. Then everyone gets the rest of the day off. 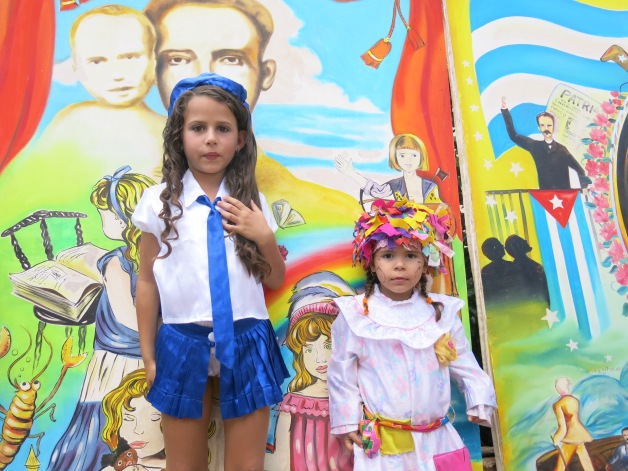 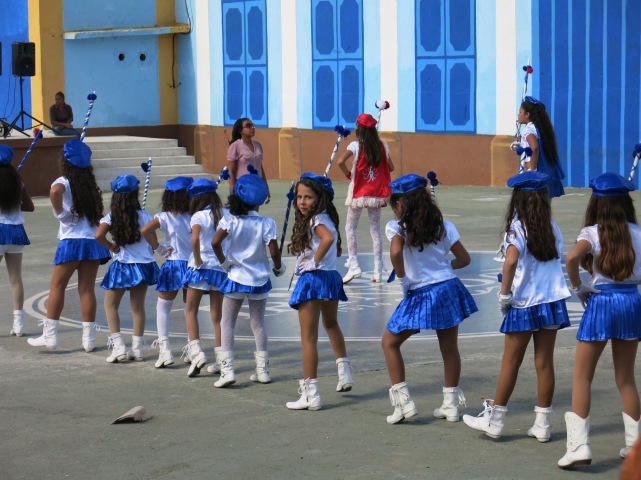 We went to a 1 year olds birthday party the other day. The kids were entertained for an hour by a clown teaching them how to dance and sing. Just before the party food was served 2 piñata’s were produced. One for the boys, a merry go round, and th 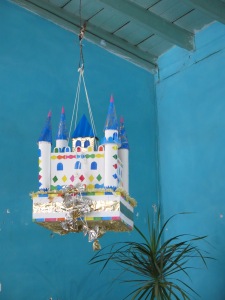 e other, a castle, for the girls. Rather than beating the piñata till it explodes Cuban piñata’s come with a trap door and, it is not sweets and lollies that rain down on the children, but coloured pencils, colouring-in books and small toys. Both Ossiels girls emerged from the scrum with handfuls and smug grins.

Our two rooms have been full nearly every night for the past few months so a very big thank you to everyone that has recommended us on line or personally to friends. We have a facebook page, Casa Los Mangos and now that I have my own internet connection, in the house of a friend, I can hopefully put my marketing hat on more often and keep in touch with the outside world a bit more comfortably. It’s slow, being dial up, but it gives me an opportunity to do some reading whilst I am waiting for the emails and websites to download. I just finished a fabulous collection of short stories: Brief Encounters with Che Guevara. Highly Recommend. 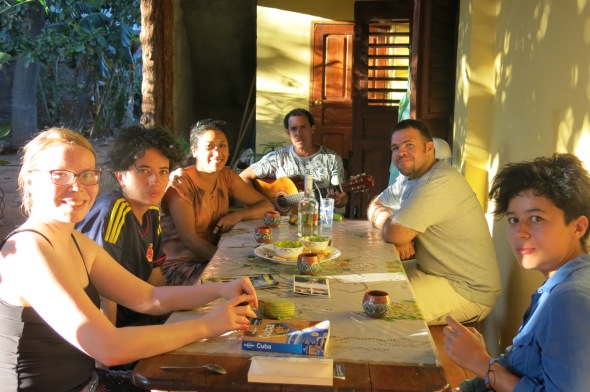