If you subscribe to National Geographic, you will be aware that the November issue surprisingly featured Cuba on the cover and contained a large article on the state of economic play, the rise of small businesses, and the dual currency system that operates here. Surprising because the National Geographic Society is an American organisation and the US imposed economic embargo forbids US citizens from having any economic dealings with Cuba, including travel to the country. The articles focus is on the changing times in Cuba (the rise of legally operated small businesses) and what effect this is having on daily life and the economy in general. The irony, which will be missed by most US readers, is that the times they are a changing in the USA too, if National Geographic considers Cuba worthy of a front cover and a 32 page feature article. I can’t wait to read the letter’s to the editor in the next few issues.

(Please don’t tell those crazy anti Castro Cuban American’s that you can in fact buy oats, butter, and peanut butter made in the USA in most of Cuban state owned supermarkets.)

Granma, the state newspaper, recently reported that all nations with the obvious exceptions of the USA, Israel, the Marshall Islands, and some other US colonies voted to end the economic embargo that is crippling the daily lives and opportunities of the Cuban people. I wonder what would happen if oil were in fact discovered in Cuban waters?

The upside of the embargo is of course that Cuba remains a McDonalds free nation. Hoorah to that!

I went to a local political meeting the other day, because Osiel was asked to sing during the proceedings. It was held in one of my favourite museums, which records the resistance against the US backed bandits in the Escambray mountains post revolution. This museum features that beautiful pastel yellow and green tower you often see in photo’s of Trinidad, which offers a bird’s eye view over the town, the mountains nearby and out to the sea. You are not actually meant to climb all the way to the top but fortunately for me there are no hidden cameras or guards.

One of the organisers of the event is a man that Osiel has worked with on various musical projects for many years, including providing entertainment for inmates in local state prisons. A man with a big heart and a strong community spirit he works at the museum and took time to explain the series of mosaics that appear on the museum floor which have often intrigued me. A clown smoking a pipe represents a school teacher and the pupils appear as a pair of scissors, a watering can, a bird, an elephant, a dog, a horse, a snake, a scorpion, a dove. Clearly the designer had a perverse sense of humour. The room also doubles as a small cinema, with a very old projector. Osiel remembers watching cartoons and revolutionary documentaries here when he was at school.

The meeting was to acknowledge teachers who had taken part in the revolution during its inception and afterward. These teachers were sent into the countryside to teach the illiterate farmers and their wives how to read and write. Half a dozen people, who had to be close to 70 years or older talked about their experiences and reflected on Cuba during this period. The audience was primarily high school students, family, friends and teachers. Sadly there were no microphones and speakers voices were somewhat drowned out by street musicians performing to tourists outside but the teenagers appeared to be pretty interested in the first hand oral histories being presented to them. There were, of course a few naughty ones sitting up the back who were frequently subjected to the eagle eyes of the teachers. But even they became animated when Osiel sang his revolutionary/traditional Cuban songs.

We escaped Trinidad for a few days to travel to Santa Clara to visit the Che Guevara museum and then into the mountains, to stay at a lakeside resort. It is winter in Cuba now but with temperatures in the high 20’s you could have fooled me. I packed a fleece expecting cool evenings but was disappointed. Instead I was doing laps in the hotel pool whilst the sun was setting over the lake. The mountains around the lake, which is in fact man made with a dam and hydro-electric power station, are covered in coconut palms, cieba (mahogany), bamboo, coffee and wild fruit trees. A local fisherman offered to take us out on the lake for a few hours to fish for trout and visit a small, remote waterfall.

The only trout we managed to catch was the greedy one we found floating in the water suffocating on the oversized fish it had tried to swallow. We did, however, spot plenty of bird life and more than a few tortoises hanging out on rocks and floating reeds. The waterfall was tucked away in a beautiful sheltered bay, which also offers a 2 hour riverside hike through orchid invested forest, which I am looking forward to exploring the next time we visit. Osiel’s 6 year old daughter, who came with us, has yet to be trained in long distance hiking by her new step mother. 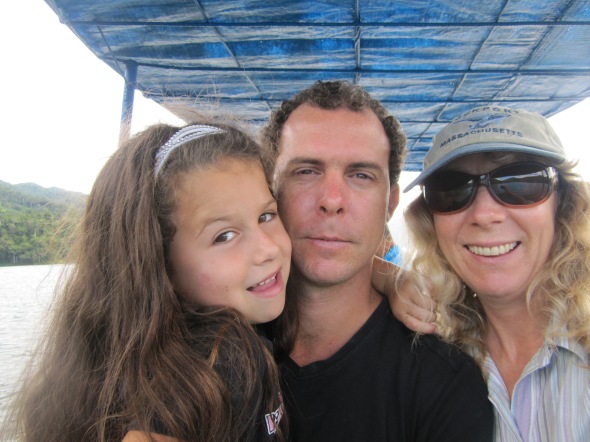 Christmas arrived early for me this week when a spice filled package arrived from my wonderful generous friend in Vermont. My Cuban family enjoyed their first taste of turmeric in a lentil curry last night followed by a traditional Cuban steamed bread pudding flavoured with nutmeg. My host mother, Maritza, is now even more determined to open a restaurant with me, in the very tempting colonial house across the road that is up for sale, with all its antique furnishings included. I must away now to prepare pizza dough for the Christmas party she is having for all the staff who work on the family farm, in the mountains. Wonder what they will think of the flavour of home grown, dried Vermont chillies?