#6 :: With loud cheers for Mr Obama and lots of love 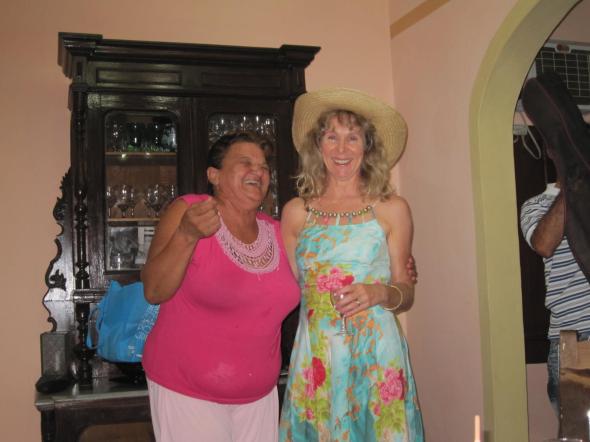 Am listening to my partner performing for tourists who are enjoying a lobster meal on the terrace whilst I am in our room below trying to keep the cat captive so she doesn’t run off with their dinner. It is proving increasingly difficult to train her to wait for leftovers as many tourists love feeding her tidbits at the table.  I fear she is about to be banished to the farm to dine on rats and mice rather than shell fish if she is not careful. We had an Italian tourist here recently who was terrified of cats and since she is a paying guest the cat was quickly seen as a liability.

Today I went on a hike in the mountains outside of Trinidad in one of the most beautiful valleys I have visited here. The drive in one was one the scariest I have undertaken. It would have been fine if I had my trusty Peugeot or a 4wd but the Korean rent a car was a little out of it’s depth. Cubans build roads that defy grafity and instead of S-bends winding gently down into the  valley floor they follow the shortest possible bitumen saving route – straight to the bottom. Forget engineering ingenuity here, its economics that dictates. Where the descent was not too steep, by Cuban standards, the road was in fact a dirt/mud track that required some pretty tricky navigation thanks to the deep rutts carved into it by the huge old military style 4wd trucks that cart groups of tourists here for a quick swim and lunch. This on top of the usual pot holes.

Despite Hurricane Sandy by-passing all but the southern states of Cuba many provinces of received unseasonal rainfalls and the Escambray Mts got more than its fair share. This proved fortuitous for me as it meant the cascades (waterfalls) in the Guanayara National Park were in full flow and hence stunningly picturesque. A 5 km walk beside the transparent Melodic River brings you to twin waterfalls with a huge cave behind to explore if you have a torch handy, which I did. (There are limestone caves all over Cuba.) When you climb up above the waterfalls you find yourself in a tranquil forest of coffee and native trees with a view back over the valley. A  perfect picnic place and one we had all to ourselves. The day trippers, who seemed to me to be mostly overweight Dutch and Germans, didn’t venture much further than the largest of the natural swimming pools with 2 small waterfalls feeding into it.

As well as the eucalypts I discovered on my last trip to the mountains I was pleasantly surprised to find bottle brush trees coming into flower. A little bit of Australia right in my backyard. Hooray. Also spotted some hydranges, azaleas and a blooming bird of paradise growing outside a restaurant so perhaps I can recreate a little of my Manly garden here.

I actually earned my first Cuban pesos this week, renting my bikes to Danish tourists. Could prove very lucrative during the high season which commences in a couple of weeks. Bikes are definitely the best mode of transport here and the lack of privately owned cars in Cuba means that it is quite safe to venture out onto the country roads. I now have a new exercise regime which incorporates a 30 km early morning or late afternoon bike ride along the beaches and coastline, via the fishing village of La Boca and the mangrove lined lagoons between Trinidad and the beach.  I am contemplating a ride to Cienfuegos next month having just driven there for a weekend with my new Cuban family. Along the way I scrutinised the gradient of the hills and believe it will be a very pleasant days ride. If the trip proves too adventurous or the weather is too hot there is the possibility of overnighting in 3 star cabins at a popular diving site 40+ km’s away. Like this option very much.

Am going to have a mojito in Mr Obama’s honour tonight. What a relief!

P.S I hear that Cuba’s north coast had some pumping waves post Hurricane Sandy – food for thought for all you wax heads.

One thought on “#6 :: With loud cheers for Mr Obama and lots of love”