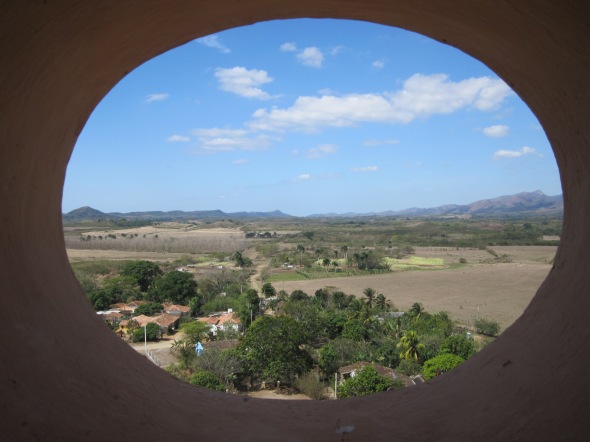 The Easter bunny doesn’t come to Cuba, unfortunately, and nor is there a tradition of eating Hot Cross Buns, which is an even greater shame. Easter Friday is known here as the Day of Saints and in Trinidad this is celebrated with a procession through the streets. Starting in the early evening people congregate outside the main Catholic Church, in the historical centre and follow behind a number of priests and strong members of the congregation who set off carrying a wooden statue of Jesus on the Cross through the streets of the old part of town. Close behind are 3 floats baring Saint Dolores, Mary and a reclining Jesus. Hundreds of men, women and children (tourists included) carrying candles join in the procession or line the streets as it passes. I was quite surprised to see so many people participating in this Christian ceremony but I later discovered that the saints have significance for believers of Santeria (Afro-Cuban religion) too who possibly made up a large proportion of the crowd. Like in other Latin American cultures many Cubans adhere to a variety or mixture of beliefs and faiths. Some of the Catholic saints have a double in Santeria where they are known as orishas.

We had our first real tropical rainstorm in what seems like months last night. Tiger, the last remaining kitten in Michichy’s (my hosts cat) litter was dumb struck at the sight and sound of all this water cascading onto the patio, never having seen it before. Torrential rain is very good news for Cuba because it means all those mangoes dangling from trees in peoples yards, farms, and along the roadside (almost everywhere you look in fact) will now start to ripen. The early season varieties are already being consumed in quantities and I am slowly starting to learn how to identify all the varieties: senora, manzano, mongoba, biscochelo, macho, compota, superjai (giant mango), mango pelu, manga blanca, filipino, mango minin, brillantina, chancleta, reina de mexico, manglo, mango marmey and datil. Some are green, others red, sometimes the flesh is quite firm but still sweet to taste and in others you can knead the whole fruit in its skin to a pulp and suck it all out of a small hole at the top. No need for a bib or face cloth when eating this variety. Some hang in bunches from a tree and others weigh down the branches so they are in easy picking reach or if you are a cow easy munching reach. All Cubans like mangoes, including cuban horses, cows, pigs, chickens, turkeys, sheep and goats. As one of my friends remarked, no one starves in Cuba when the mangoes are in season. The season starts now and I believe continues through to July. I will send a report of my favourite mango at the seasons end but I am thinking it might be senora because its flesh is fibreless and full of juice.

Many other tropical fruits I was not familiar with until visiting here are also starting to come into season. There are at least 3 kinds of custard apple: Anong, Chirimolla and Guanabana, a Manzana Pera which is a cross between an apple and a pear, a lychee like fruit called a mamonsillo, Nispero a really sweet capsicum look alike and the Marmey (Sapote) which is best enjoyed as a smoothy with milk or yogurt.

I nearly bought a car recently and am appalled to tell you that the second car market here is probably one of the most buoyant in the world. People are buying and selling 20 year old cars for almost $20,000. 50+ year old classic cars go for even more. It seems that market forces are in full swing in this socialist neck of the woods. Cars are in very short supply which is one of the main reasons that all those pre-revolution American automobiles – Chevrolets etc – are still on the road. The government issues cars to special citizens eg sportsmen, medicoes who have served in overseas aid brigades. Chinese cars manufactured by The Geely company, who infamously bought Volvo, are well represented in the the rental car Agency fleets although there are plenty of Peugeots and Kias of all shapes and sizes on the roads too.

I became a permanent resident of Cuba this week which means I am now blessed with an indentity card bearing a mug shot of myself and my thumbprint, plus my details including height, skin and eye colour. I rode in style to the provincial capital, Santi Spiritis, in a red and white Chevrolet taxi to collect my ‘carnet’ from the Immigration Office. The Immigration Officer there was all smiles as she prepared my card, joking about my first name. Seems the whole world knows and loves Shrek. The office is most impressive, housed in an old colonial building with huge ceilings, airy central courtyard and its pastel coloured marble columns that reminded me of the multi-coloured fruit tingles that I enjoyed as a kid (Do they still exist?). Afterwards Ossiel and I celebrated with a locally brewed beer but the French tourists in the casa requested Mango Daiquiris so I just had to have one of those too.

My new status entitles me to receive the same monthly rations as all Cuban’s (rice, sugar, cooking oil, bread, spaghetti (occasionally), kidney beans, eggs, chicken (occasionally) and soy meat. The taxi driver was very quick to ask for my portion of picadillo – vegetarian/soy mince meat. A joke because Cubans are in fact more obsessive about red meat than Aussies are even though they don’t get much opportunity, for economic reasons, to indulge their passion. I also have access to the medical system (Cuban Medicare) and can now buy a house and a car, get a job or start a business, and pay for goods and services in Cuban pesos, rather than the Convertible Pesos currency that was introduced for tourists or yumas (gringo).(One of my little Cuban cousins has only recently desisted from calling me ‘the yuma’ after the family repeatedly reminded her that I had a name and that this was not polite.)

I was recently invited to join some tourists on their tour of the Valley of Sugar Mills so I have added some photo’s of the view from the old Slave Watchtower in the direction of Trinidad. As you can see we are in desperate need of rain. The local horses are looking particularly malnourished at present as there is little grass about and certainly no oats or barley for them to eat. The lucky ones get to eat King grass (from the Sugar cane family) or mushy cornmeal in water and now mangoes.